How to Fix iPhone 1970 Bug? – IndieTech.My.id, Some models of iPhone, iPad and iPod risks becoming inoperable and could brick your iphone if the date is changed manually to January 1, 1970.

Date The iphone 1970 bug is in the models of iPhone, iPad and iPod touch that use 64-bit processors with operating system iOS 8 or iOS 9. It is thus about iPhone 5S and later models, iPad Air, iPad Mini 2 and the sixth-generation iPod Touch or later models.

Date iphone 1970 bug means that devices that turn off after the date set at January 1, 1970 stuck in a reboot loop / bricked.

The risk of unintended change the date of its iPhone, iPad and iPod are small. It requires a lot of scrolling and the new settings for date and time is saved, and then entered again. It has happened to date on the demo copy of the Apple Stores changed deliberately so that the devices become unusable. 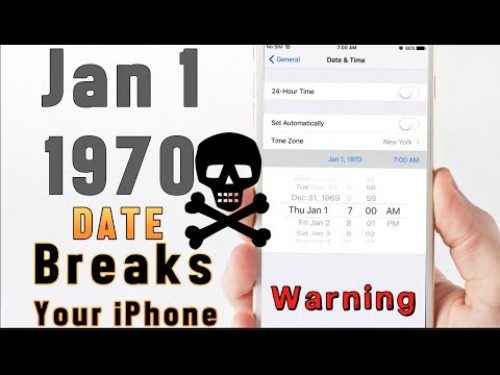 Via the wireless network would someone with great knowledge of the area to manipulate the date in devices that are set to “Set Automatically” so that it was set to, for example, January 1, 1970. The date is a kind of Year Zero in the computer context. So-called unix, enter the number of seconds elapsed since midnight on 1 January 1970.

Some people believe that by changing the date in your iPhone to January 1, 1970 you’ll destroy your iPhone, forever.

In this video from Tom Scott, we get an explanation of what it is actually destroying your iPhone when you set the date to 1 January 1970.