New electric sports car similar to a Batmobile – IndieTech, Technology: A new electric car in the luxury category has seen the light. The prototype resembles a UFO and is full of advanced technology.

Just as Tesla has now Faraday Future named after a pioneer of electricity – Nikola Tesla and Michael Faraday.
It also looks as if Faraday going to try to write himself into the history books’ chapter on electricity. The company has “stolen” many of Tesla’s best brains to develop Faraday’s first electric car. And during the first week revealed that only 18 months old company its first prototype of a super electric car: FFZero1.

The appointed immediately to the competitor to Tesla Models S, but the presentation of FFZero1 rejected the CEO of Faraday, Nick Sampson, Faraday and Tesla would be competitors.
That assertion does not seem to have affected the environment, and the prototype was renamed quickly to the “Tesla-killer”. 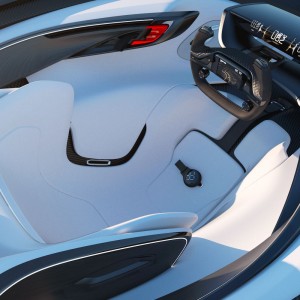 Tesla killer resembles a UFO, especially from the front and around the seat. And it’s loaded with high-tech equipment and innovative.

It is possible, for example, channels through the body that allows ambient air to pass through the car, so that not all the air to be pushed around. This reduces air resistance, while the batteries air cooled – perfectly natural.
The car’s load-bearing frame – chassis – can be adapted to a number of smaller batteries are connected. The series-connected batteries is easier to upload and replace than a single large battery.
0-100 km / h in three seconds

The engine of this new electric sport car has a performance of 1000 horsepower and allows the car to accelerate from 0 to 100 km / h in three seconds, about the same time as Tesla’s Model S. They do not need to sit back pressed into the seat for many seconds during acceleration until it flies in the car maximum speed of 321 km / h.

But Faraday Future announced that they currently do not expect to put FFZero1 in production. The prototype is more meant as a composite demonstration of all the technology the 18-month-old company intends to use in its other electric cars.

Just as Tesla is investing Faraday with this new electric sport car exclusive design and tasty driving experience to consumers in the upper middle class and above.