Pokemon Moon and Pokemon Sun by Nintendo Direct Fake or Real? – Indietech.my.id, Nintendo has registered 2 trade marks in Europe  for Pokémon Sun and Pokemon Moon. In applications for registration are available through the page OHIM may also be the official logos in English for both editions.

But … What are Pokémon Sun and Pokemon Moon? Probably the Nintendo Direct to be held on February 26 at 16:00 unveil the mystery and provide the first data. Perhaps we are witnessing the seventh generation of the main saga, probably for 3DS, due to the brevity of the names and the existence of at least two editions of pokemon sun and moon for the same project, however until official confirmation the possibility that they may be spinoffs not rule or even if we turn to history, they can even be preventive and not final marks than other generations had, such as Pokémon and Pokémon Amethyst Brown. However, it would be rare that the latter is the case, because as you can see this time we have available official logos. 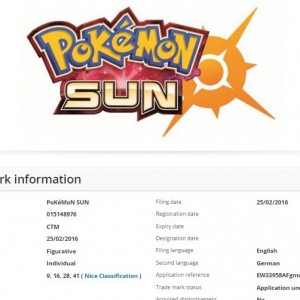 overdrafts, via Joe Merrick, official domains Pokémon-Sun.com y Pokémon-Moon.com, currently redirected to the main website of Pokémon. So is this Pokemon sun and moon Fake or Real? Let me know your opinion.