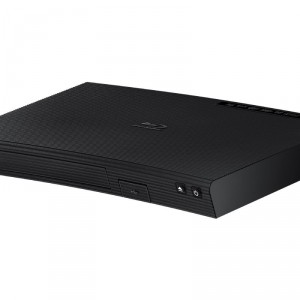 Samsung BD-J5900 is a curved 3D Bluray player for playback of high-definition Blu-ray movies or older DVD – and CD’s. The player offers a razor-sharp 1080p resolution and decoding of high resolution audio formats Dolby True HD and DTS HD Master Audio (up to 7.1). Do you a Samsung LED – or UHD TV can also use the remote to control both the TV and Bluray player.

Samsung BD-J5900 Blu Ray Player has built-in wireless network where players can connect to the home’s existing network with no wires or separate dongles. Unlike the 2015 TV sets are a different interface with Samsung Blu Ray Player apps to download and stream called Opera TV which among others Netflix and other apps available. Are you curious about what Smart TV means but owns an older TV, you give BD-J5900 chance to experience this great samsung blu ray player.