SolSuite 2016 is a high-quality collection of more than 630 solitaire games. All of the world’s best-known solitaire games are here, including Spider solitaire, Klondike, FreeCell, Pyramid, Golf, Yukon, Monte Carlo, Canfield, Gaps, Forty Thieves, Four Seasons, Napoleon, Diplomat, La Belle Lucie, Flower Garden, Rouge et Noir. Has been also invented dozens of solitaires with your fun in mind, such as King of Scotland, Foxtrot, Mayflower and many others!

Each solitaire has more than nine trillion possible shuffles, so the game remains fresh, no matter how many times you play. Enjoy the detailed statistics of each game with graphs, 3D charts (pies and bars) and tables to estimate your skill level (by total, current session, series of wins and losses, players’ games won, players’ score, hi-scores…), statistics for All Games, Won games, Not Won games, Over Average, Under Average, Not Played….

SolSuite 2016 allows you to customize the Card Sets, Card Backs, Backgrounds (you also have the possibility of changing the Backgrounds by using customized image files), the Winning Animations, the Sounds, the Pointers, the Levels of the Undo/Redo option, the Toolbar… You can select from many different predefined Card Sets (large, small…). There are dozens of Backgrounds to try as well.

Enter Hi-Scores and manage your Statistics. Play to reach the Hi-Score for every layout and manage games won, with 3D Graphics. You can also publish your “Overall Score” and your “Single Game Score” on the Internet and compare it with all SolSuite players around the world.

Create an unlimited number of Players so that you can challenge your friends to beat one another’s Hi-Scores, Games won, Score Statistics. 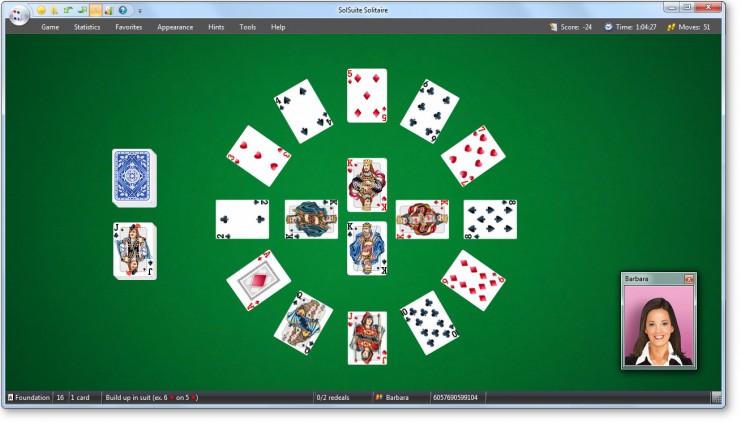 SolSuite 2016 – The Most Complete Solitaire Collection: